Today was day 3 at the gym. 3 days in a row! I think you get a medal when you go 3 days in a row, right? Yesterday we went in the afternoon and the gym was full of big muscly guys. I think I prefer going in the morning where it’s more women and older people. That’s more my speed. I’m not quite at the “lift 300 pounds and grunt really loud so that everyone knows you’re lifting 300 pounds” phase. Give me a couple weeks. One of my clients is a big muscly guy and has promised to train me once I win his case. I’ve bartered with him- I won’t charge him anymore for his case and he will train me. He said he’d train me for free if [WHEN!!!] I win his case. I have 2 witnesses to hold him to that!

This morning the owner of the gym was there and was super excited that we were there too. I know this because he exclaimed “HI!” and waved with both of his arms over his head. Not quite a 3-day medal, but close. 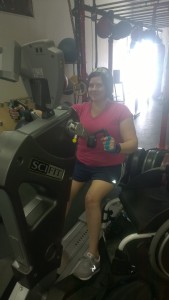 Me on the arm bike at the gym

I’ve learned that people are more awkward around me at the gym. They don’t want to crowd me or offend me by assuming things. Case in point: This morning I was using weights in a free weight area. I happened to be next to a balance ball apparatus. It’s the thing that looks like half a balance ball with the bottom being a flat board. (In looking it up, I see it’s called a Bosu Ball.) I think you stand on it and try to balance. I used one back in the day during PT (like 2006). I was never any good at it.

Anyway, a woman came up to me nervously asked if I was using it. I tried to not laugh when I said “no” because she was so sincere and nice about it. She probably felt awkward because it was right next to me and didn’t want to offend me by assuming that I couldn’t use it.

This made me realize that people generally are nice. And respectful. And nonjudgmental. She could have easily just assumed I wasn’t using the thing. But she was worried about hurting my feelings. That was very nice.