Yesterday morning, as the hubs and I lazed around the house watching the Sunday morning news before church, I was playing around on Pinterest.  (Well, it started on Facebook where I found a picture of a really cool wheelchair accessible pool and ended up on Pinterest, which covered just about all of my social media outlets for the morning.)  While playing around on Pinterest, I found these really cool hinges which allow for a door to open completely out of the way so a wheelchair can get through.

When I first got home from the hospital, my wheelchair wouldn’t fit though many of the doorways in the house.  So, for the bathroom and closet in the master bedroom and the bathroom in the hallway, we had to take the doors off.  (I say we, but I actually mean my dad and brother who did it for me.  I wasn’t one for manual labor in those days.) So, imagine my surprise when I saw these hinges online!  After Mass got out, the hubs and I went over to Lowe’s and he found them in the hinge aisle.  We bought 4 as I was convinced that we would be able to figure it out and be able to the two doors which still remained down.  (I say we, but I actually mean him.  I’m still not doing much manual labor these days.)

We got home and realized that they didn’t come with instructions and they were a bit confusing.  I turned my attention back to the trusty internet, but there weren’t many tutorials on how to attach the swing Clear Full Mortise Hinges.  I found one YouTube video but it was not all that helpful.  We decided to just try to figure it out on our own.  And I took photos of the steps so I could hopefully pass along the “how to” on these amazing hinges to anyone else who may try to undertake this task.  (Spoiler alert: once we figured it out, it wasn’t that hard at all!  Ok, it wasn’t hard at all for me cause I sat there and watched, inserting my wisdom every now and then in the form of tips and ideas.  But, even the hubs said it wasn’t that hard at all.  I did reward him by not complaining about the amount of sports and news on the TV for the rest of the day.) 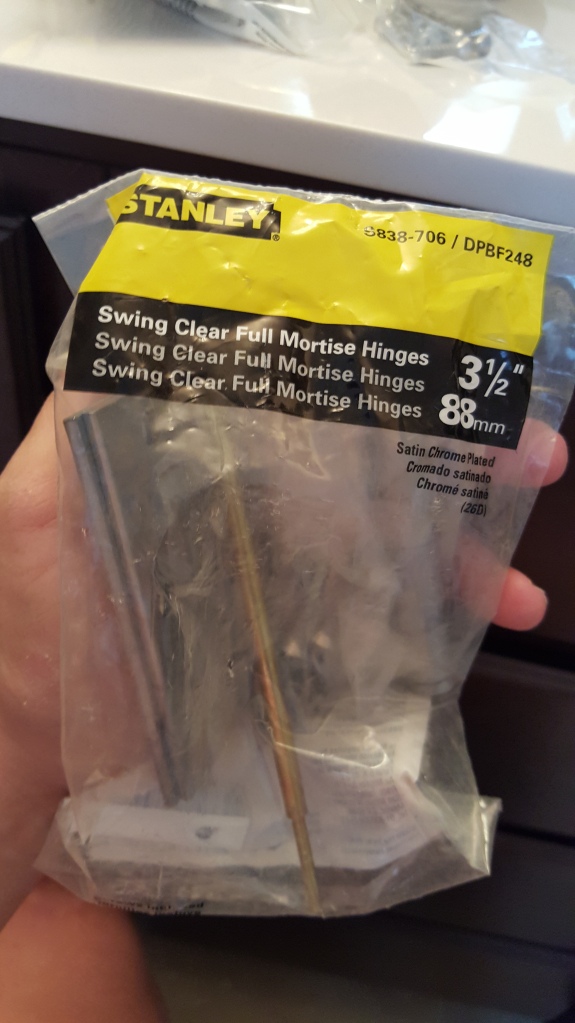 Swing Clear Hinges for Wheelchair Accessible doorways out of the package 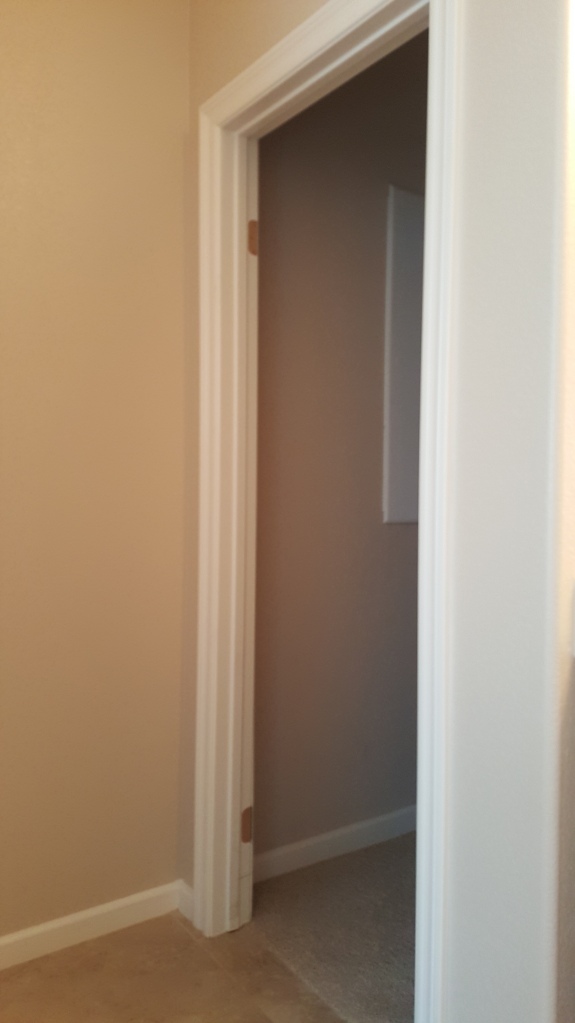 Now that we’ve set the scene for the installation, let’s get to the fun part: 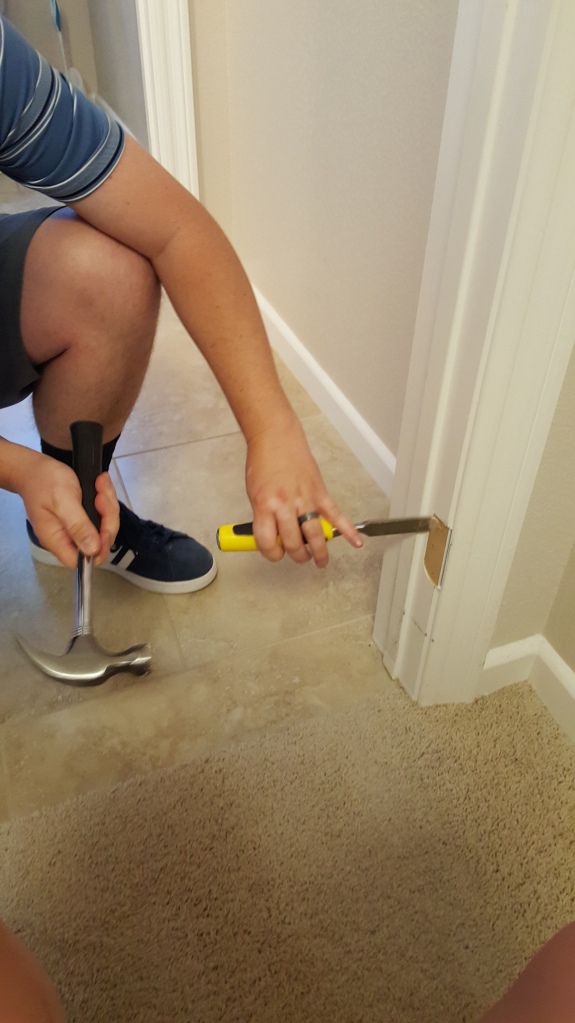 Chisel out the space so the hinges will fit snuggly

Our previous hinges had been rounded in the corners.  The new hinges are squared off, which meant the hubs had to pull out his trusty hammer and chisel to make the corners square.  I think his next project should be in marble or ice sculpting.  We live in the desert, so maybe not ice.

Chisel the rounded corners of the door 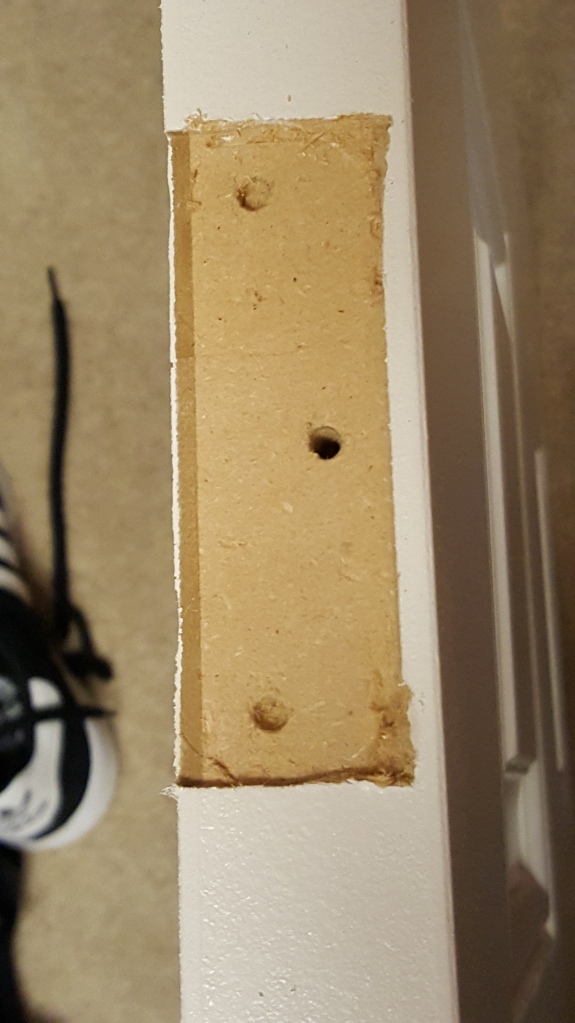 Make the rounded edges square so they match the door frame

Attach the hinges to the wall

This is how the hinge should look without the door on it.  The hinges we used were Stanley brand.  A good way to figure out the direction is the part with the word “Stanley” is on the wall with the name facing out.

Attach the door to the hinge

It’s easier to attach the door to the hinge than vice versa.  Trust me.  We tried.

Please ignore all the scraped paint on the doorway.  Or, if you’re in a wheelchair, I’m sure your walls and doorways look the same way.  Don’t worry: that’s why the good Lord invented touch-up paint!

Fully hung door with Stanley Swing Clear Full Mortise Hinges (AKA a doorway with a door that I can now get through in my wheelchair!)

Here’s where things get even weirder: I promise you that I just stumbled across these hinges in the morning.  In the evening, when I was doing my nightly Facebooking (No, that’s not the weird part… I’m really on it all the time.  Yes, I’m an addict.) my “memories” thing came up, showing me the hauntings of years past.  Yesterday was the 2 year anniversary of the day I went home from the hospital and the 2 year anniversary of the day the doors came down!!  That’s so weird!!  I definitely believe in a higher power and that things happened for a reason.  I truly believe that something drew my attention to those hinges on that day so we could close the door (ha. ha. pun intended!) on that whole chapter of my life.  It’s all about moving on, figuring life out and adapting!  Not that having a closet door is the end all be all.  But, it’s cool that something we had to take down because of the disability we were able to put back on as a figurative semblance of normalcy!