My parents live in a two-story house.   For nearly three years, I never made it upstairs.

My family is close.  Like, obscenely close.  Like, we actually enjoy each other’s company and want to hang out with each other.  I talk to my mom every day (sometimes, multiple times in a day).  And I talk to my dad a couple times a week.  He’s not quite as chatty on the phone, so I usually save up for something big for him.  But they always want us around.  Heck, I lived off and on with them until I was 30 years old!

Family BBQs are pretty commonplace in my family.  It’s that above-mentioned like of each other coupled with the fact that my folks live on the beach.  I like to joke that we never need to join a beach club because we have our own private one.  The downside is that I can’t actually get on the beach in my wheelchair.  It’s rumored that the lifeguard has a beach wheelchair to be used on first come first serve basis.  I haven’t tested that theory yet and actually tried.  I’ve been fine for the past couple years being beach adjacent.  But now that the Little Mister is here, I feel like I have to (read: really want to) expand my horizons.  With my niece, I was fine watching her play in the sand from the safety of the concrete pathway.  I could shout encouragement from afar and still be apart of her fun.  But, now that there is this little guy that I’m responsible for, I want to be up in that action.  It makes me sad to think that he’d be having fun playing in the muddy watery sand by the waves and I would only hear about it later in stories.

Last weekend, the hubs, Little Mister and I made the 2 hour trek to my folks house for a BBQ.  It was still kind of cold, so there was no “on the beach” action.  We just hung out on the patio and chatted and BBQ-ed.  It was fine at first.  A bit chilly, but nothing a sweater couldn’t fix.  But then it started getting even colder.  I became worried about Little Mister being too cold.  The problem with my parents house is that the ground floor has a bedroom, office, bathroom and wet bar.  The second level is where the kitchen, dining room and living room are.  That’s why for almost three years I have relegated myself to the outside.  I’d rejected the idea of butt scooting up the stairs.  It was humiliating, I thought.  It was hard, I figured.  I just didn’t want to do it, I declared.

Well, again, it’s funny what you will do when it’s not yourself your worried about anymore.  Pride?  What’s that?  I have a baby now whose well-being trumps any minor inconvenience I may experience.  My dad was concerned about my going upstairs.  I don’t think it was a matter of thinking I couldn’t do it, but rather worrying about my well-being.  Over-exerting myself or getting stuck upstairs and not being able to use the bathroom up there.  But, as I often find myself saying, I am my father’s daughter.  I definitely got his stubbornness gene.  I’d decided I was going upstairs, and now I was determined. 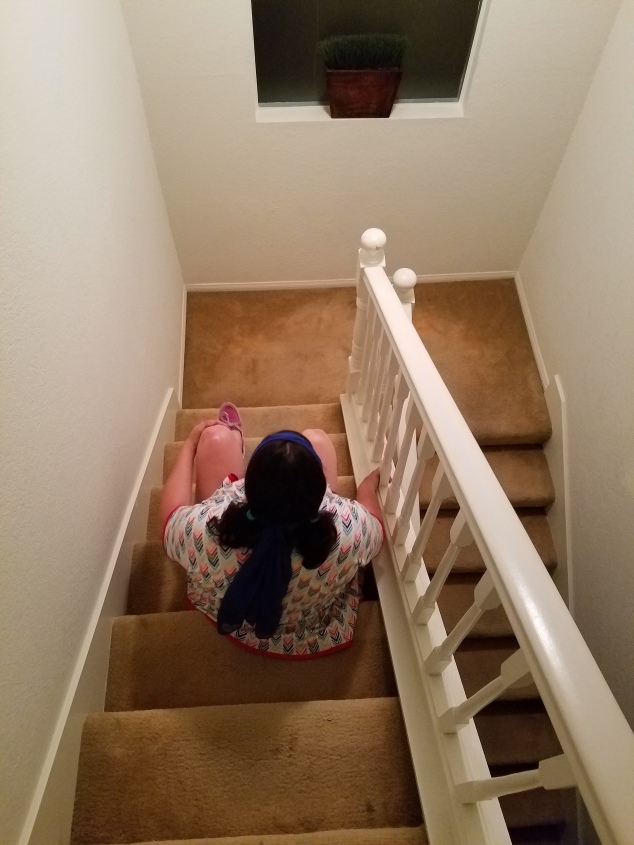 It actually wasn’t that hard.  I just plopped onto the bottom step from my wheelchair and just took it step by step.  I’d scoot up and then bring my legs up one by one to the step below me.  I tried hard to focus on using my legs, because it’s amazing what the brain can do.  I never give up on the hope of positive thinking.  The hardest part was the flat landing mid-stairway where I had to be careful not to drag (read: rug burn) my ankles.  It didn’t take that long to go up the stairs.  The hubs brought my wheelchair up after me.  And he and my mom helped me get back up onto the chair.  For the first time in almost 3 years, I was upstairs!  I could see the ocean!  I could eat at the table!  I could sit on the sofa!  It shouldn’t have been so amazing, but it was!

Going down was much easier, as was transferring from the bottom step back up to my wheelchair.  And the cardio I got from that exertion was amazing!  I was sweating by the end of both treks.  So, let’s just say that while it’s something I could do, I’m glad it’s getting to be summer and we will be having months of outdoor enjoyment!

My parents live in a two-story house.  And I finally tackled my fears and those stairs, and made it upstairs.

One thought on “Stairs = Tackled!”