Everyone, meet Cash.  Cash, meet everyone. 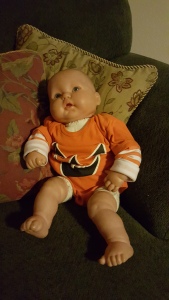 Cash is my super creepy practice baby doll.  I found him at a consignment shop where I was with a friend looking at all the discounted gently used baby items.  (Sidenote: It’s amazing how much stuff people with kids go through.  And how quickly.  Consignment shops are such a great idea!)  When I bought Cash, I had him in a bag, that made the cashier do a double take.  Then she placed him on the counter which made another employee come quickly over to find out why there was a baby on the counter.  He’s that realistic!  And thus, that creepy!  I sometimes wonder if I will find myself in a Twilight Zone episode where he comes to life.

The purpose of Cash was for me to start getting acquainted to having a baby before the actual baby comes along.  Having a baby is difficult for any new parent, but for a paralyzed or quadriplegic parent, there are even more challenges.  I wanted to get used to holding, lifting, carrying a baby before the real one came along.  And even though Cash looks real enough, he’s not.  If I drop him or bang his head on the baby carrier (which I did the first couple times trying), he won’t die.  That’s a definite plus in my book.

To make Cash even more realistic, I de-stuffed him, and refilled him with aquarium rocks.  This particular doll was kind of awkward to weight, because his legs were solid plastic.  So, I couldn’t put any rocks in them.  But his head, body and arms were all hollow.  This made him pretty top heavy.  I figured this wasn’t especially bad since babies throw their little bobble heads around.

To accomplish the weighting, I cut a seam on the bottom, between his two legs, as this was there was already a seam there to rip.  I also saved some of the stuffing and placed it around him so he didn’t feel especially “rocky”.  I also put a layer of stuffing in his neck to keep his head rocks in place.

Everyone who holds the baby told me how heavy he was compared to a newborn.  I made him about 10 pounds.  But, I figured it would be better to have a heavier practice baby so the real thing would be lighter in comparison, and hopefully a bit easier.  Plus, the real thing moves, so that will make him feel heavier at times.  If someone else is reading this to do their own doll, you can really make it as heavy or light as you wish.  I just figured 10-ish pounds was a good weight for me.

All in all, I know that a practice baby doll, even weighted, will not at all be similar to the real thing.  No matter how creepily realistic Cash is, he will not be my real baby boy.  But, I think that the practice that I’ve been able to get in with him has been very helpful when the real baby boy gets here.

And in case you were wondering about the name: the hubs said no to that as the name for the real baby boy and being a huge Johnny Cash fan, I had to fit it in somewhere.