Throughout my life I have successfully managed to not become a Justin Timberlake fan.  Sometimes it was difficult, but I persisted in my determination.  When NSync first came out and were mega-popular, I was safe in my wannabe punk phase.  Yeah, no thanks NSync and JT with your curly hair, I’m crushing on Tim Armstrong in all his Rancidy, tattooey hotness!  When JT and Britney broke up I was Team Brit, #obviously.  I learned all about Girl Power from the Spice Girls (OK, so maybe I wasn’t super secure in my punk phase) and sided with her, of course!   There were some times when I was tempted to become a Timbergroupie.  Some of the movies he did were pretty funny.  I mean, he was in Shrek the Third.  (I realize that I keep losing punkness with each line I type.)  You’d have to have no soul to not appreciate the acting in the Shrek franchise.  And the skits on SNL.  D*%k in a Box?!  So, maybe he’s not terrible, but I’m still too cool to say that I’m a fan of his.  I was trying to remain steadfast in my non-boy-band-groupie status.  Or former boy band status.  He brought sexy back (or so he claimed) and I was able to snicker that sexy never left and who the heck did this guy think he was.  My friends would laugh.  [Confession: I somehow know all the words to the song so *maybe* I listened to it once or twice secretly and ashamedly.]  And when he started dating Jessica Biel, I realized I hated him more because she is so cool and so beautiful and this former boy-bander is going to ruin her!  I went to high school with a girl who played soccer with Ms. Biel and would actually say how cool she was.  (I definitely did not watch 7th Heaven, though I think that was because it conflicted with a show I did watch- Maybe Gilmore Girls? I don’t recall- and [insert old person voice here] back in my day we didn’t have DVR.  We made the tough choices of choosing one show over another and being loyal!)  But I still thought she was too cool for him.  And then they got married and maybe he isn’t that bad if she’s sticking it out with him.  And more SNL skits came out which I had to admit were funny.  “Give it on up to Homelessville!” So eventually I became more neutral about him.  But, I refused to be on the bandwagon.

Cut to last week.  And I bought a pair of jeans without looking at the label.  And now I have to admit that my biggest fear has come true: I am a Justin Timberlake fan!  Isn’t that terrible?  Decades of avoiding it, but it happened anyway.  But William Rast (his label for those of you who are less JT-ey than I am) has created a stupidly dumb (read: awesome) product.  I love cute jeans.  But, in my constantly seated life, they’re usually lost on me.  Most designers focus on making butts look good and putting detailing on the pockets.  That does me about negative 17% good.  So when I saw these jeans on line with the narrow ankle that wouldn’t make my paralyzed legs look awful and detailing on the side of the leg I was eager.  When I tried them on, they had the perfect amount of stretch to fit nicely on my awkward body.  And they weren’t low rise.  I like to actually pull my pants up and not have perma-plumbers-crack since I’m always sitting.

I got a million and three compliments on them when I wore them over the weekend.

So screw you, Justin Timberlake and your glorious William Rast brand.  I’m now a self-proclaimed Timberlaker. 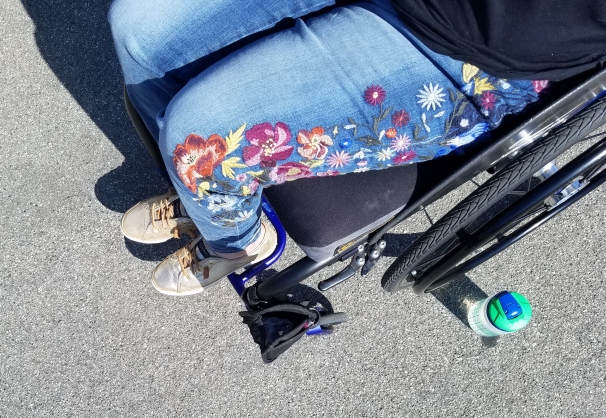